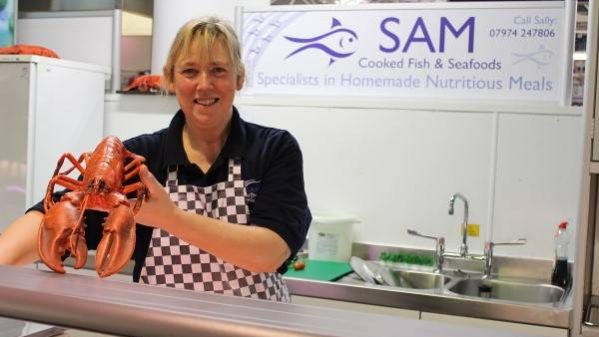 It’s a welcome return to Blackburn Market for seafood stallholder, Sally Halliday of SAMS Seafood who sells a wide range of freshly caught shellfish and a range of home-made ready to cook convenience dishes.

There are few traders who can boast such a strong market heritage. Sally’s grandparents, Harry and Alice Bolton sold shellfish on the original outside market in Blackburn during the 1950s.  Her father, Les Halliday worked for Harry in his crab production factory in Southport and married his daughter, (Sally’s mum) Margo and they took over the stall.

In 1965 the family moved from the outdoor market to the new 3 day indoor market and Sally remembers helping on the stall from the age of 4. ‘I remember a little silver scoop that we used for the winkle which we sold for 6d a bag or two for a shilling.’ It was about 15 years ago that Sally decided to diversify and developed her popular ready to cook fish pies and battered fish products to compete with the supermarkets.

Sally didn’t feel able to commit to the new 6 day Blackburn Market when it first opened, but with support around her she’s now built up customers both on Darwen’s three day market and in Blackburn where she’s usually on the stall herself on Wednesdays and Saturdays and alternate Fridays.

Sally who only purchases quality seafood from mainly North Sea fishing ports says, ‘It’s been absolutely brilliant coming back and seeing all the old customers again. Everyone has been so welcoming.  I just wish my dad was well enough to come down to the market and meet everyone again.  He’d be delighted with the reception and the support we’ve been getting.’